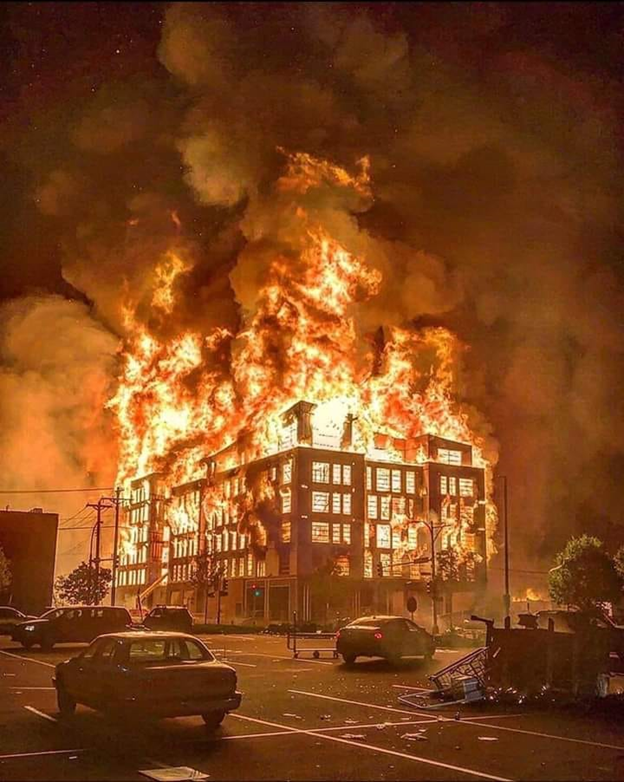 Minneapolis is burning and the fire is spreading across the country.

George Floyd was murdered on May 25 by the Minneapolis Police Department. He was murdered by Derek Chauvin, an officer who has murdered innocent people in the past and gotten away with it. Chauvin put his knee and full weight on Floyd’s neck during an arrest for alleged check fraud. Floyd was not resisting arrest. In the video of his murder, Floyd can be seen saying, “I can’t breathe”, followed by the haunting image of the officers lifting his limp body off the pavement.

Rage breaks through calluses that have grown thick to protect inner life from routine external trauma. Anger fills our bodies. The story of George Floyd’s death is like so many others we have heard before. The authorities have done very little to correct the problem of unarmed black and brown men and women being killed by police. Ordinary people realize that justice for George Floyd is up to them, and understand that means taking to the streets.

For three nights in a row, Minneapolis has been ablaze. Crowds of thousands have gathered, setting buildings on fire, destroying police cars and getting into skirmishes with the cops. On the night of Thursday, the 28th, a police station near where George Floyd was murdered was overwhelmed by protesters and set on fire. An image of Marx’s words, spray-painted on the outside of a store, went viral, reading, “When our turn comes, we shall not make excuses for the terror.”

These protests have spread throughout the country, with demonstrations in Portland, Los Angeles, Phoenix, Albuquerque, Denver, Memphis, Columbus, and New York. Some of these have turned violent. In Denver, police fired tear gas to get protesters off the interstate, and at the end of the demonstration a gun fired six or seven shots. It is not clear if it was aimed at demonstrators. In Columbus, protesters broke the windows of the State Capitol as police shot pepper spray into the crowds. In Phoenix, there were standoffs between protesters and police. In New York, at least 40 were arrested in a confrontation with police in Union Square.

Conservatives and some liberals have condemned this property destruction, which they see as violence. They believe that this fight should be one of peaceful moral persuasion. Trump has called the protesters “thugs”, and has threatened them with violence, tweeting, “when the looting starts, the shooting starts.” Twitter flagged this post for violating its policy against glorifying violence. Trump’s deadly incitement is not just aimed at police, but at far-right militias who may take it on themselves to attack demonstrators. In Louisville, Kentucky seven people were struck by gunfire Thursday while protesting over the death of Breona Taylor, a black woman killed by police in March.

Trump’s barbarism aside, the deeper point is that this rioting became inevitable when the main solution put forward to the regular killing of black and brown people was that they act respectable and polite to the police. Instead of addressing the root causes of police violence, the authorities have done nothing, and we are told to be patient and to win through slow peaceful persuasion.

But this is a rigged game. American capitalism was built on the backs of black people brought here against their will. As Malcolm X famously said, “you can’t have capitalism without racism.” Racism was the justification for enslaving an entire group of people based upon the color of their skin in order to use their free labor. This free labor was the fuel that powered the motor of early capitalism. Racism has been used for centuries as a tool to divide the working class, giving white workers a stake in defending the system that oppresses them through tiny privileges denied to working class people of color.

It is important to note that much of what was labeled as opportunistic looting was in fact driven by a need for supplies to treat people hit with police weapons such as pepper spray. The economic crisis has also deprived many of the ability to get a hold of basic resources, and this was another factor that was driving this “looting”. Besides, what is taking some small items from a store for personal use compared to the $434 billion American billionaires have added to their pockets during the pandemic? That is the true crime.

The Mayor, Jacob Frey, has called for the officers involved in the death of George Floyd to be prosecuted. The officers have already been fired and Derek Chauvin has been taken into police custody. While calling for an end to the property destruction, Frey said that he understood the anger of the city’s residents, even going so far as to say that the “symbolism of a building cannot outweigh the importance of life.”

While this is a step forward from the long history of mayors stonewalling and supporting their racist police forces, it is important to remember that his response did not occur in a vacuum. It took years of on-the-ground organizing and action, from Ferguson to Black Lives Matter, to shift the conversation so radically that it even affects elected officials. It is an important reminder of the kind of action needed to affect social change. The fact that Derek Chauvin was arrested so quickly is further evidence of this.

In an impressive act of solidarity, Minneapolis bus drivers have refused to transport police to demonstrations, or act as police vans bringing arrested demonstrators to precincts. Their union has backed them up, with Amalgamated Transport Union president John Costa stating on Thursday “As our members – bus drivers – have the right to refuse work they consider dangerous or unsafe during the pandemic, so too Minneapolis bus drivers – our members – have the right to refuse the dangerous duty of transporting police to protests and arrested demonstrators away from these communities where many of these drivers live.”

ATU Local 1005, the union’s chapter in Minneapolis and St. Paul, issued a letter of solidarity with the protesters, calling for “a new Civil Rights Movement … that is joined with the labor movement.”

“ATU members face racism daily. Our members live in and work the neighborhoods where actions like this happen, and where this took place, now watched in horror across the globe,” the local’s letter said. “Police brutality is unacceptable! We say ‘NOT ONE MORE’ execution of a black life by the hands of the police. NOT ONE MORE! JUSTICE FOR GEORGE FLOYD!”

The state is trying to put the lid back on the pressure cooker after it has exploded but protests against the killing of George Floyd will continue. Discontent with the racist state, economic collapse, and the inequity of the pandemic are all merging. We are seeing the beginnings of a rebellion. In New York, where this article is being written, two events are planned for the next two days. They are listed below.

See you in the streets. 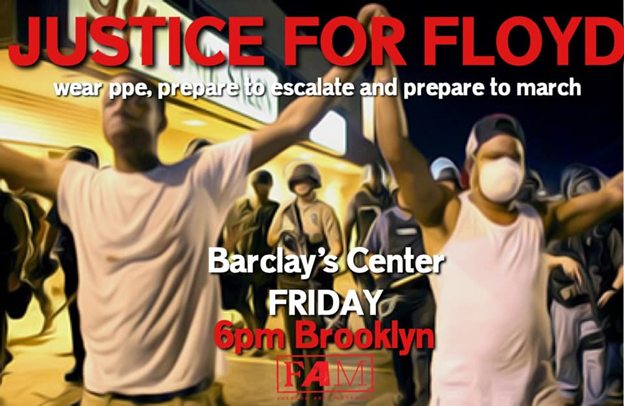 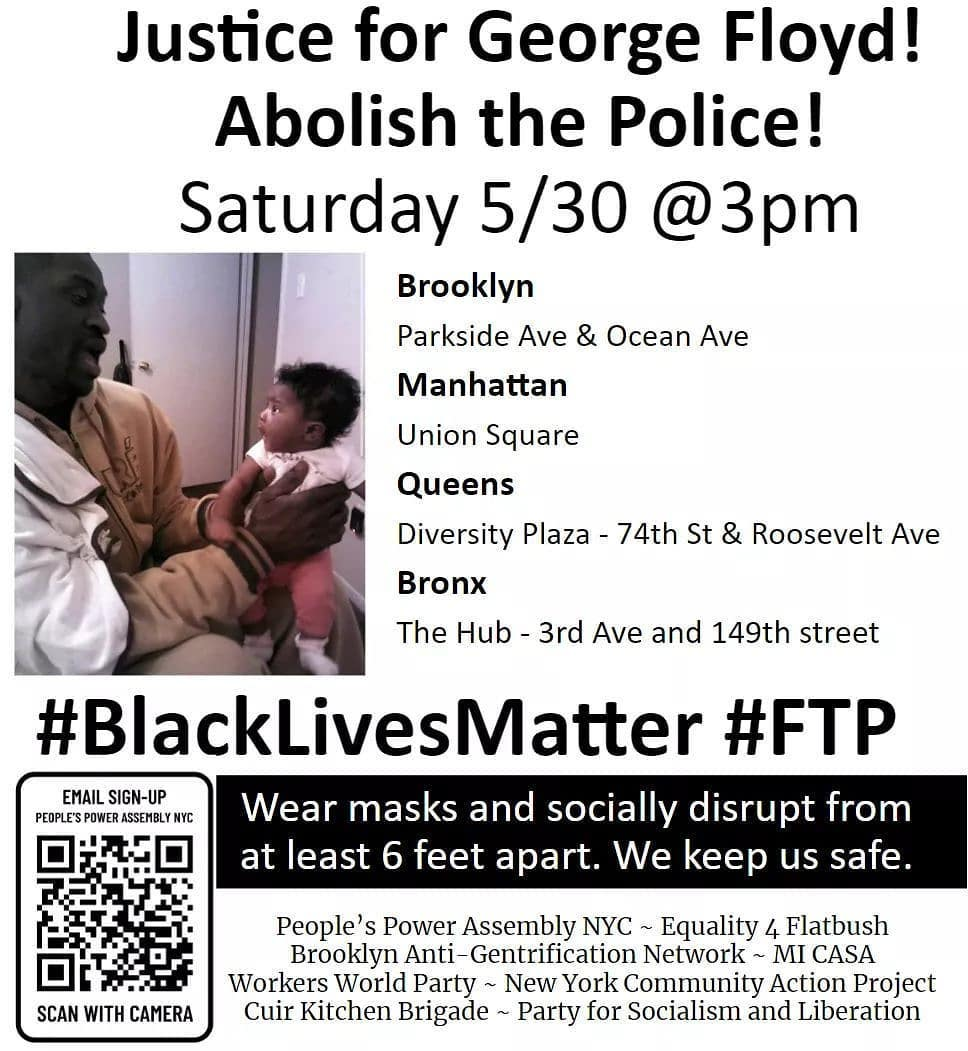 We’re a revolutionary socialist organization with members active across the United States.

We stand in the international socialist tradition and are connected with other like-minded socialist groups around the world in the International Socialist Tendency.

To learn more about us and our work, click here.

To join Marx21, fill out this form.